Disclaimer: All information provided on this website is for informational purposes only and should not be used as an investment advice, instruction, offer, contract or warranty. In additional, detail and artist;s impressions on this site are provided by respective developers/owners. UProperty.com.SG does not guarantee the accuracy, timeliness or reliability of such information. In using this site, you accept that UProperty.com.SG is not liable to you for any direct, indirect, special, incidental, exemplary or consequential damages, including intangible losses, resulting from the use of this web site or services or products of any third party.

Midtown Bay is a prestigious project developed by Guocoland which situated in the midst of beach road. The project is a joint venture between Guocoland and Guoco Group Ltd companies in a ratio of 70:30%. The beach road property was acquired by the collaborators at a valuation of $1.62 billion. Midtown Bay will offer a collection of more than 200 exclusive units. The amenities provided by mid town suite includes guard house, club house, indoor gym, function room, tennis court, a huge 50 meter swimming pool , sun deck, BBQ pits and children’s play ground. The new lifestyle of urbanites demands effortless transition between living, working and entertaining. Thus, the units have been designed to offer residents the flexibility to live, work or entertain at home.

Located within the Downtown Core Planning Area, which forms part of Singapore’s city centre Link up 3 micro-markets : City Hall, Marina Centre & Bugis At the intersection of two key development corridors: Beach Road and Ophir-Rochor Road Served by four MRT lines and Nicoll Highway, as well as the North-South Expressway in the future

As part of its place-making efforts to inject vibrancy, Guoco Midtown will introduce two main public squares named City Room and Market Place, on either side of the Seawater Street Seawater Street can also be closed to create a combined 60,000 sq ft space to host large-scale events that can accommodate up to 2000 people 10 gardens at different levels (of which six gardens are accessible to public) 200,000 sq ft of plaza and lush greenery

New lifestyle concept in response to the growing trend of live, work and socializing Functional and flexible layout with spacious living and dining spaces for socializing and entertainment All recreational amenities, landscape, public & green spaces, networking spaces at Guoco Midtown are an extension of your living space Interior spaces curated by renowned designer Peter Tay 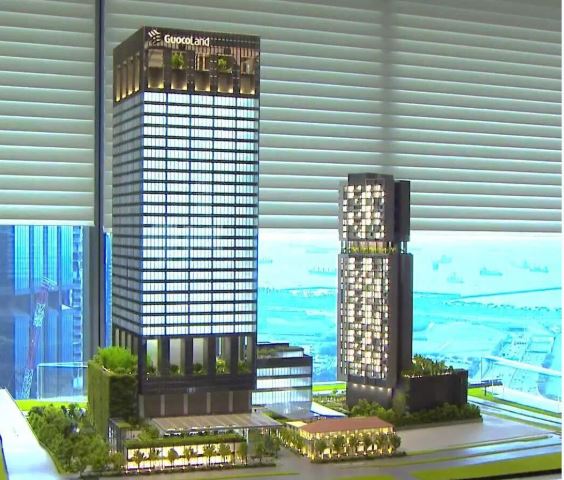 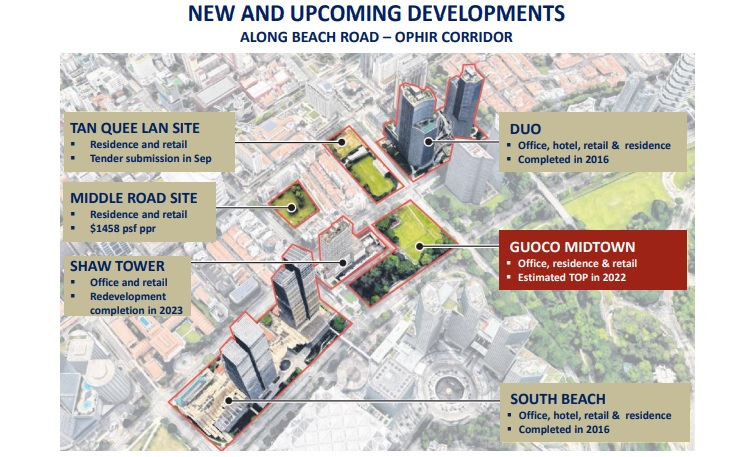 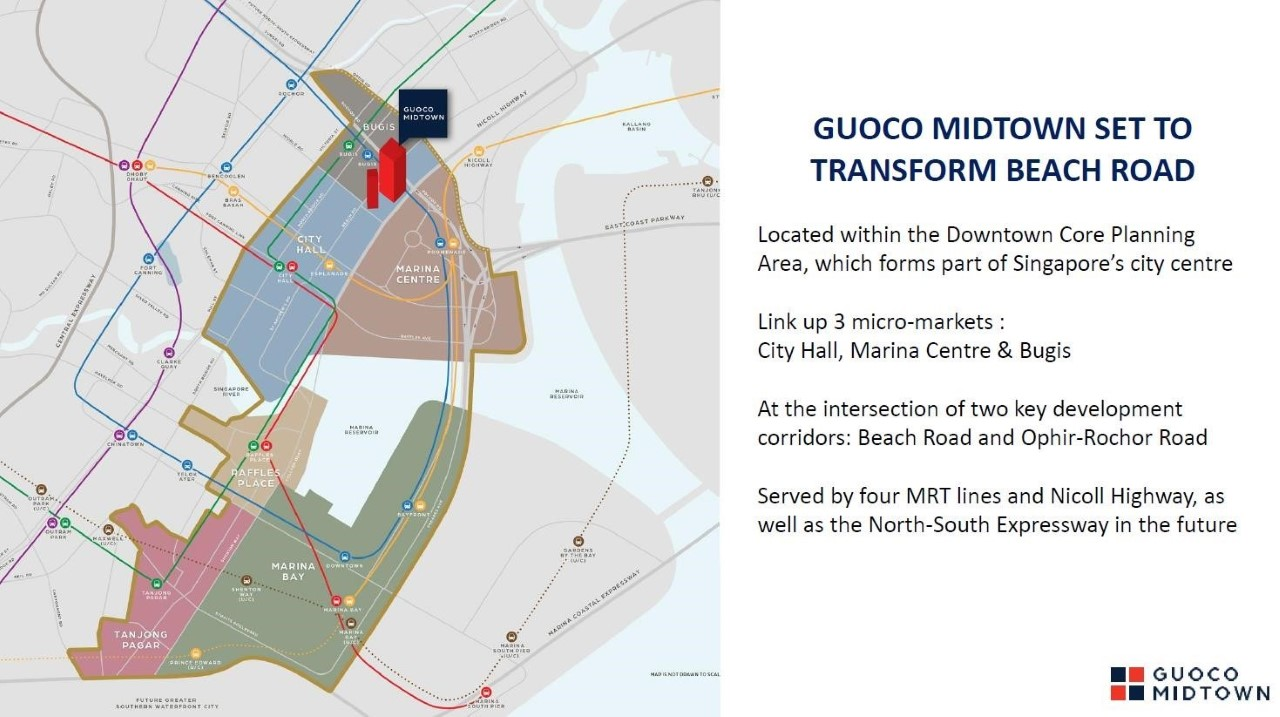 Guoco Midtown is located at the intersection of two key development corridors: Beach Road and Ophir-Rochor Road, and links up 3 micro-markets, namely City Hall, Marina Centre and Bugis. When it is completed, Guoco Midtown will be a premium, vibrant business and lifestyle destination, attracting a dynamic community that will rejuvenate and reposition Beach Road.

The mixed-use, integrated development will also be served by four MRT lines - the East-West, Downtown, North-South and Circle lines - and has a direct underground link to the Bugis MRT interchange station. For occupants who frequent in buses there are several bus stations located at Nilcoll Highway and Beach Road. The Central Expressway and East Coast Parkway are a few of the many major roadways connecting Guocoland Midtown Bays with Singapore City.

Access to education is not an issue as Midtown Bay is located close to some of Singapore’s elite and well regarded educational institutions such as Singapore Management University, School of the Arts (SOTA) and Farrer Park Primary School. There are many more such premier institutions which provide world class education situated at a commutable distance from our Midtown Bay. This paves way for your children to receive quality education. 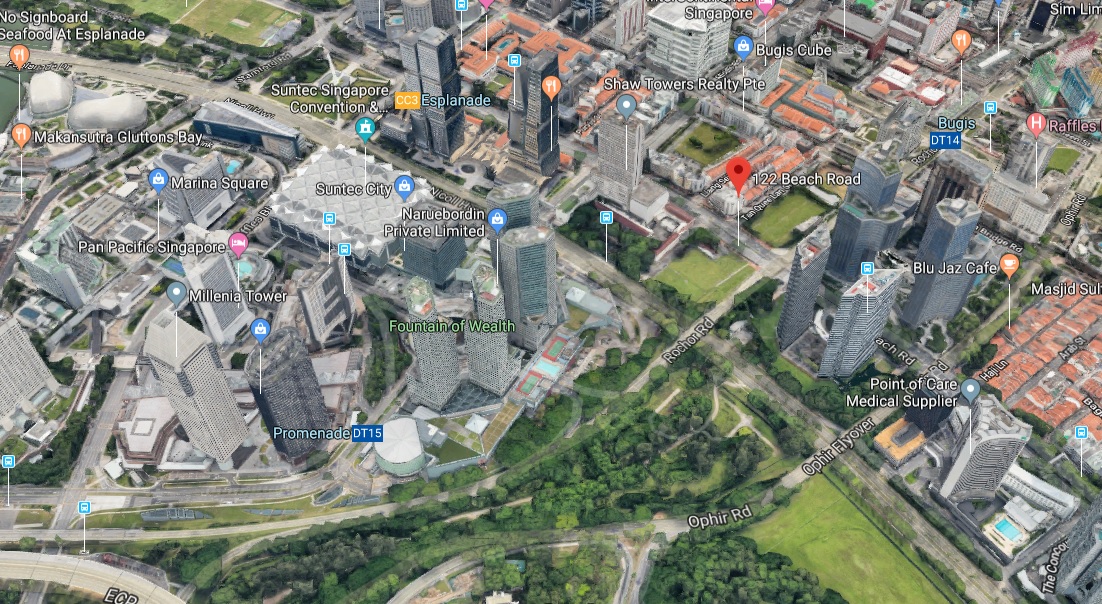 Hi, thank you for your interest.
How can I help you?